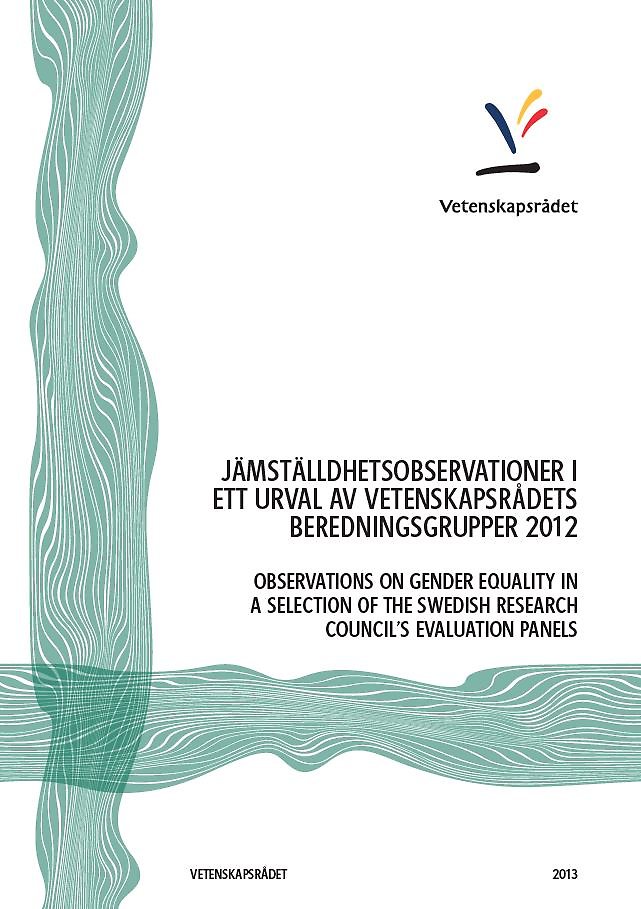 This report contains both the Swedish and the English version.

These observations on gender equality aim to investigate and bring to light any differences in the Swedish Research Council’s evaluation process in regard to gender and to provide recommendations for how the process can be developed and improved. The observations are divided into three main areas: group dynamics and interaction during evaluation meetings, process and approach, and evaluation of applications and applicants. The recommendations are addressed to the Swedish Research Council and its scientific councils, councils and committees.

In some, but not all, panels there are clear gender patterns in the group dynamics during meetings. This may involve how members were seated in the room or how well people were heard and how often members were acknowledged when speaking. There were also differences in who informally assumed higher status in a panel and who raised or lowered their grades. The role of the officer from the Swedish Research Council was often unclear, and their ways of dealing with procedural and policy questions during evaluation meetings differed. Similarly, the chairpersons’ ways of structuring and running the evaluation meetings varied.

Concerning evaluations, the disciplinary domains differed in terms of the extent to which the research or the researcher was the focus of discussions. Further, the expert panels displayed disparate ways of formulating and assessing what constitutes good research and what qualifications or attributes are desirable in a researcher. Comments on the age, parental leaves, collaboration, and independence of the applicants were brought to bear in certain discussions, but this varied across subject areas and evaluation panels. Objectivity in evaluations was seldom treated as problematic by members. Only in one panel was there any conscious calibration of grades at the beginning of the meeting.

In many panels the expected gender balance and gender distribution among approved applications was problematised, which often led to discussions in which women were reduced to representatives of their gender. Affirmative action was seldom applied and was regarded as somewhat negative, as it was seen as lowering the status of an application. Generally speaking, members felt there was a shortage of tools and clear guidelines for dealing with the issue of gender distribution in a more coherent and consistent manner.